Veteran actress Neetu Kapoor took to Instagram Stories to share a family picture, including daughter Riddhima Kapoor Sahni, son-in-law Bharat Sahni and granddaughter Samara Sahni. The Kapoors are reportedly in Udaipur to ring in Riddhima’s birthday on Wednesday. “Celebrations begin,” Neetu captioned the picture. The picture showed Neetu, Riddhima and Bharat seated on a sofa by a table while Samara stood next to her grandmother. 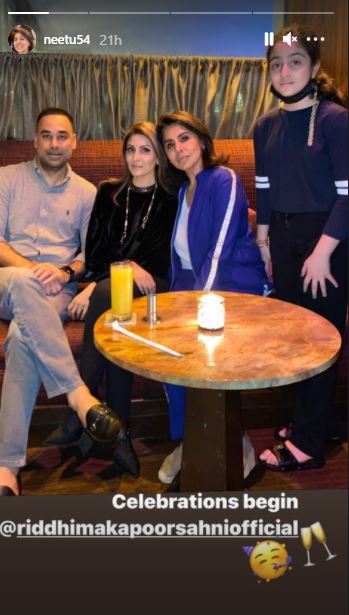 Recently, Neetu threw a gorgeous party remembering Rishi Kapoor, and invited his family members and close friends. His brother actor Randhir Kapoor, filmmakers David Dhawan and Rumi Jafry, as well as actor Shatrughan Sinha were among the guests of the party. The veteran actress shared a bunch of pictures from the party on her Instagram stories. She thanked Rumi Jafry and his wife, designer Hanan Jafry from bringing a cardboard cut-out of the late actor. She wrote, “Thank you @rumijafry and @hananjafry for celebrating his birthday. You both are all heart.”

She also shared a picture of a board that said ‘Remembering Chintuji.’ Apart from that, she shared a photo of the birthday cake, which included some of his favourite items including a bottle of whiskey, a guitar, a CD of his hit songs, the Twitter logo, a bowl of mutton curry and Nag Champa incense sticks. The cake had ‘Happy Birthday Chintuji’ written on it.

Meanwhile, Neetu will be making a comeback to movies with Jug Jugg Jeeyo.