Shibani Dandekar gets her boyfriend Farhan Akhtar’s name tattooed on her neck.

Shibani Dandekar is showing off her enviable neck alongside her latest ink. The actress-singer debuted some new ink in honour of her boyfriend, actor-producer Farhan Akhtar, on Friday, August 27. Shibani shared a photo on her Instagram story that gave fans a look at the tattoo on her neck. 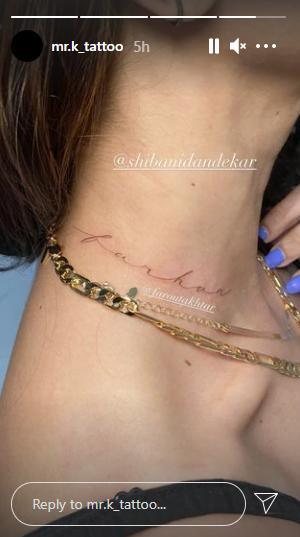 Shibani Dandekar and Farhan Akhtar make one of the hottest couples in B-Town. The duo often teases their fans with mushy pictures and never fails to shower praises on each other’s work. Shibani and Farhan have been together for a while, therefore, every now and then the couple encounters the ‘marriage question.’ Even their fans are eagerly waiting for them to tie the knot. However, in a recent interview, Shibani talked about her “biggest learning” from living with her longtime boyfriend Farhan during the Covid-19 pandemic.

Speaking to Hindustan Times, Shibani Dandekar said she spends “a lot of time” doing things together with Farhan Akhtar, adding: “And then when you need your space, do things on your own. That’s so important.” The actress shared her biggest takeaway from sharing space with Farhan during the lockdown: “The biggest learning in this process was just the idea of balance and just respecting each other’s routine and what both people need.”